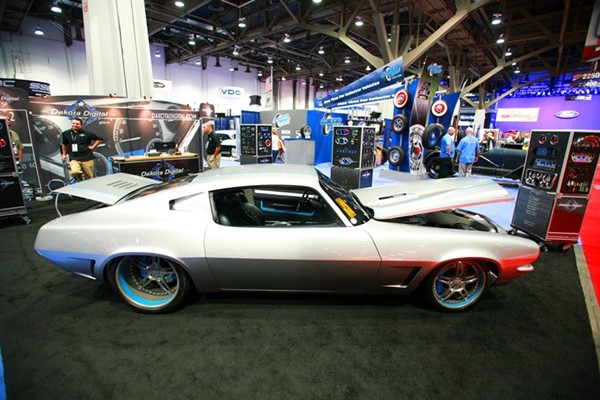 Las Vegas, NV is no stranger to glitz and glamour, and here at the SEMA Show the Mothers® Shine Award is one of the most coveted achievements within the car builder’s community. For this 12th annual edition of the Shine Award, the crop of contenders comes from, no less than, hundreds of the world’s premier cars on display at the most anticipated aftermarket industry event of the year. An international panel of respected members of the automotive world, including seasoned builders, paint specialists, journalists and previous Shine Award recipients, are tasked with selecting a winner. Judging is based on overall appearance, fit and finish, attention to detail, integration of custom and stock elements, creative vision and execution of concept.

Hosting the ceremony this year, held at the Mothers Polish® booth, were aftermarket industry veterans Joe Sebergandio and Will Handzel.

The 2012 Shine Award was presented to Dave and Karen Leisinger, Sioux Falls, SD for their 1971 Chevrolet Camaro named “ProfeSSor.” This sleek, PPG Porsche Silver Camaro was so named because its 500ci Chevy LSX engine was built by drag racing legen Warren “The Professor” Johnson. The rest of the meticulous drivetrain is hung on an Art Morrison chassis with C5 Corvette front suspension and a Ford nine-inch rear end with a Watts Link. But it is the innumerable body mods that set this ’71 apart such as the widened, wedge cut and leaned forward front end, laid back windshield, chopped roof, extended rockers, widened quarter panels, raised deck and custom taillight panel and rear valance. Roger Burman at Lakeside Rods and Rides in Rockwell City, IA built “ProfeSSor” in sixteen months before putting it on display in the Dakota Digital booth #22875.