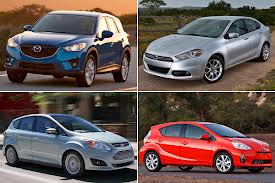 Here’s a metric that will light up the screens and auto news roundups of all the print media in the top-rung Los Angeles market:

24 all-electric or plug-in hybrid 2013 models will punctuate the L.A. show, which is the site of the second best attended show in the U.S.

Audience-grabber choice of “Green car of the year.” Fans of stardom cars will have five finalists to feature the following quintet for their No. 1 testing and hammering. They are Ford’s duo-Fusion Energy and C-Max, Dodge Dart Aero, Toyota Prius and Mazda CX-5 ACTIV.