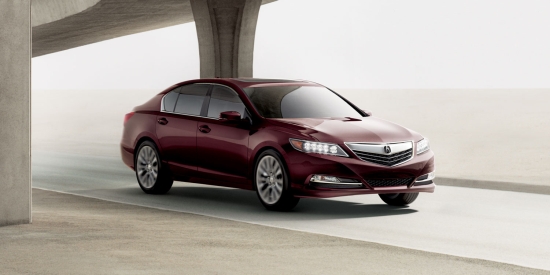 No segment has been more prominent and promising in the auto show season than midsize sedans.

The New York show drew waves of attention this year with unveiling of the 2014 Acura RLX, a high-tech successor to Acura’s forlorn RL, which parent company Honda introduced earlier than planned to challenge five foes which have gained attention for their introduction of revolutionary new driving systems.

Historically, Honda and Acura have been eclipsed by competitors in the number of advanced safety and economy systems they add to their new models at one time. The RLX offers a large array of upscale options in a single lineup, however, endeavoring to keep pace with such formidable sedans as Hyundai Genesis, Audi A6, BMW 535i, Cadillac CTS, LexusGS350, Mercedes E350, and Infinite M37.

Base-priced at $49,345 as Acura’s new flagship, the RLX has been given a decided boost in overall length and occupant space. The extra-equipment roster lifts the price about $10,000-as it introduces an Advance package which “corrects” the oversteering tendencies of the front-drive RLX when the car is driven hard.

Another RLX performance innovation-Lane Keeping Assist-slows and stops the car if it drives too close to the vehicles in front.

Midsize luxury cars are well-known for their driving, styling, and fuel-saving perks. The RLX has a 6-speed transmission, variable valve timing and variable cylinder management. Its MPG metrics are 20/331/24 city/highway/combined.

Writes the Wall Street Journal’s auto writer, Dan Neil: “The RLX is a very calculated product, and the calculation is simply that the company could save development money by retaining a front-drive platform and winning over luxury buyers with the RLX’s wealth of onboard driver-assist, convenience and entertainment technologies.”

Well, what else is new? Driver’s desires to buy upscale the next round is a well-established trait. We can’t wait for the next drive-itself model-or the next regulation making drivers, occupants and cars safer, easier to operate and aesthetically better!  ~ Mac Gordon