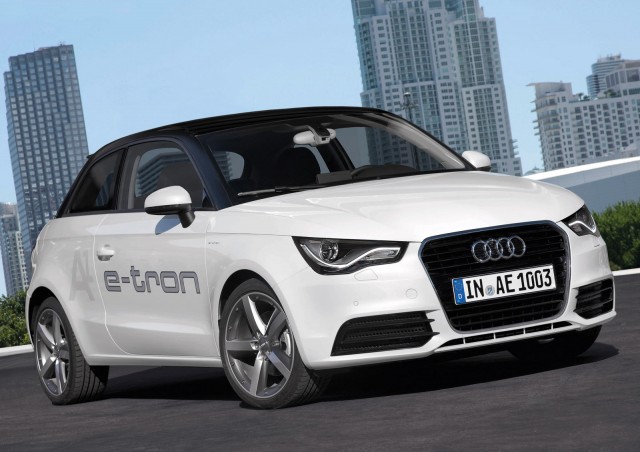 Ingolstadt-No automaker has book-ended its new-car lineup more thoroughly this auto show season than Audi; Volkswagen’s luxury brand from the A1 to the R8.

Checks with Audi dealers confirm the appeal of Audis to the youth market.

A dealer in Sylvania, OH, a suburb of Toledo, OH, and one in Kitchener, Ont, agree that if anything Audi could use more cars from Germany all through its ranges from A1 To R8.

For years, Audi has kept a tight lip on its approach to electric-power technology.

But now VW’s luxury premier brand has lifted the curtain that will showcase a dual-made hybrid powerplant on two surprise “bookends” the entry-level A1 E-tron and the top-of-the-line R8 supercar.

The technology and “double whammy” have been featured by Audi in an edition of its Encounter technology magazine, which delves deep into details of the brands ability to offer versions throughout all the models in its lineup.

Unlike GM’s Chevrolet Volt and other single hybrid powerplants in Ford and GM cars, Audi’s dual-mode mitigates the problems of battery range and recharging slowness by using two electric motors, an internal combustion engine and a single-speed transmission.

The Audi R8 and A1 are rechargeable in about 1 ½ hours using “heavy current,” states Audis e-team director, Dr. Daniel Boland.

For the A1, Audi has developed a special 3-cylinder engine to bolster the two-seater coupe’s range.

“The dual-mode hybrid has no gearshifts and no rubber-band effect,” Dr. Boland tells The Auto Channel.com. “It drives as smoothly as a purely electric car.”

Audi dealer Dave Fischer, CEO of the Detroit market’s Suburban Group of 27 dealerships, says younger drivers like the fact that the R8 accelerates from zero to 90 mph in 4.2 seconds.

“Of all our brands,” says Fischer, “Audi is the hottest. The lithium-ion battery works like a charm and few cars corner like the R8 or A1.”

In media test runs at night, new style cues were highly visible and drew applause from younger media types. “Among Audi innovations in what it calls the age of electromobility: electrical torque vectoring; targeted breaking as individual wheels accelerate; illuminated LEDs along the R8’s flanks; a multi-material space frame with lots of aluminum, and zero tailpipe emissions in city traffic.

According to Audi, Dual Mode is the E-Car Range Extender Solution. No other major brand outside the VW Group is known to agree.

Are the “rules of the game” facing pressure for major changes?