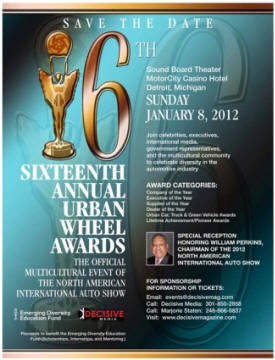 Lindsay Brooke’s recount of the development of the Chevrolet Volt for the SAE’s Vehicle Electrification web site won the “Best of the Internet” award at The 20th Annual International Automotive Media Awards.

The deadline passed for nominating books for this year’s Dean Batchelor Awards (judges need time to read them). But the Articles, Audio/visual (TV, radio, video or film) and Photography competitions are open until Sept. 15. Any automotive journalistic work in these categories may be nominated but must be entered by an MPG member. Go to http://motorpressguild.org/events  for complete information.

SEMA’s most recent inductees into its Hall of Fame are Gray Baskerville, Art Chrisman, Chris Economaki and John Towle. . . . Red Bull Racing Technical Director Adrian Newey was presented England’s Motorsport Industry Association’s most prestigious personal award by Damon Hill during MIA’s annual Summer Reception at the House of Lords. He is the only designer to win the Formula One Constructors Championship with three different F1 teams. His designs also have won IMSA GTP races and the Indianapolis 500.

Media representatives may register at no charge for the third annual Business of Plugging In, an electric vehicle conference in Dearborn, Mich. October 11-13. Sponsored by the Center For Auto Research,the three-day event will gather representatives from utilities, automotive manufacturers and suppliers, investors, regulators, to discuss global strategy for the long-term growth and continued success of the market. There will be ride ‘n drives of the newest plug-in vehicles.

The hottest vehicle platforms on display during the 2011 SEMA Show in Las Vegas, Nev., Nov. 1-3 will be presented with the coveted SEMA Award in four categories: Hottest Car, Hottest Truck, Hottest 4×4-SUV, and – for the first time – Hottest Sport Compact. . . Decisive Media won Gold Ink Awards for its Decisive and Decisive Latino magazines in the annual competition conducted by Printing Impressions Magazine. Winners were selected from more than 1,000 entries in 46 different categories of print communications.

Ford has the most ideal vehicles and Porsche is the ideal brand as determined in a unique survey responded to by 72,000 acquirers of new 2011 model year cars and trucks. Conducted by research and consulting firm Auto Pacific, the survey identifies “the vehicles that owners want to change the least. In other words, the vehicles that already match their owner’s demands.”

In the quest to find the next A-list automobile, this year’s edition of the LA Auto Show Design Challenge will focus on designing Hollywood’s hottest new movie car. For the second year in a row, participating design studios from not only the U.S., but also Germany and Japan, will compete against one another to showcase their talents. The winner will be announced Nov.17.