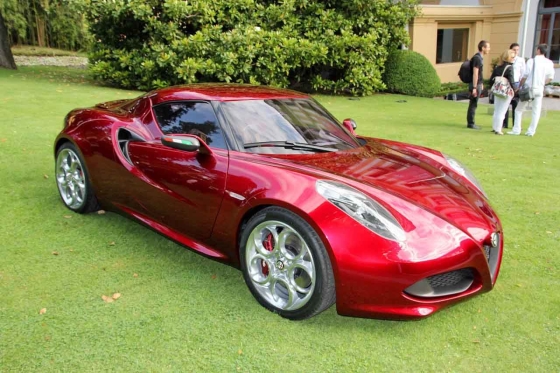 MILAN, ITALY-Designers and painters have submitted mixed logos for Fiat’s luxury Alfa Romeo brand as it nears entry to the North American market.

Bars, circles and loops all face stylists and engineers mulling over entries in the unofficial survey of a picture-perfect logo for Fiat’s Alfa Romeo 4C brand, which soon will be earmarked for marketing at top-selling Fiat dealerships in North America.

The exercise is called Gloria. Approach of a marketing day for Alfa Romeo C has prompted a flood of inquiries and media stories from Alfa Romeo enthusiasts. Gloria is the name for reference.

Pre-marketing interest has been encouraged by displays of a 2014-model Alfa Romeo 4C sports coupe at the early auto shows in Detroit, Chicago and Cleveland.

At Fiat/Alfa stands, showgoers have raised the ‘when’ question over and over again, only to be frustrated by the paucity of “we don’t know” responses from badge-wearing personnel.

Inquirers are telling consumers that the New York show Easter week will unveil production models of the 4C, plus a launch advertising campaign.

It has been 18 years since Alfa Romeo withdrew from the U.S. market, distressing owners and would-be owners.

Fiat’s return to the U.S. market with the 500C subcompact and surging demand for more economical small cars have sparked demand for Fiat 500 models, along with construction of more Fiat showrooms in the U.S. at Chrysler Group dealerships.

Chrysler/Fiat/Alfa Romeo CEO Sergio Marchionne says he’ll issue the call for a marketing green light on Alfa in the U.S. “It’ll be sooner than later,” he says. “We expect Alfa to be sold out from the beginning, with world-class quality and enough inventory to satisfy the demand. Alfa Romeo is already a best seller.”

No Rebuffs by Swiss at Geneva

Automotive News’ 02-25-2013 issue concocts a 2015 “Alfa Giulia” concept model for Geneva-bringing to mind the Shakespeare love drama and evoking the latent romance between Alfa Romeo and its American admirers.

Sinophiles are lured to Geneva by Qoros, whose display features a compact sedan, a crossover hatchback and the Estate station wagon. Qoros is jointly owned by China’s Chery Automobile company and investor Israel Group. It will focus for now on markets in China and Europe.

My favorite interviews over a 65-year auto writers career