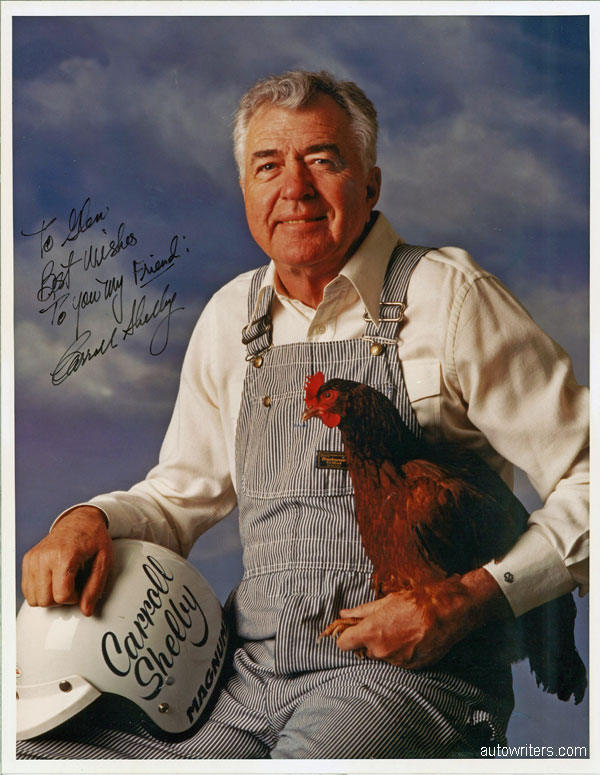 Life was a poker game for Carroll Shelby and he played to win with the end justifying the means – as long as you stayed legal, didn’t exaggerate beyond what the listener should know better than to believe and you were reasonably kind to women, children and dumb animals. Holding his cards close to his chest and almost always with an ace in the hole, he was a fierce, determined and unrelenting competitor.

He looked and mostly dressed the part he played –  a tall, self-reliant Texas cowpoke ready to take on the world. When he walked on the set of a TV spot he shot for Chrysler, the director said, “He’s the perfect Carroll Shelby.”

His looks, easy laugh and smile and his unpretentious “good old boy” guise, coupled with his racecar driver-builder fame made him welcome in throne rooms, board rooms, bedrooms and with his eponymous brand of chili seasonings and corn bread mix, even the kitchen. It might have included the bathroom if his Carroll Shelby Pit Stop deodorant had sold. On the golf course his dissembling took the form of “playing just well enough to win,” according to an old friend. Disingenuous or not, it belied the substance behind the warning of lesser, perhaps envious mortals, “Be sure to count your fingers after you shake hands with Shelby.” For the unaware, that warning meant being “slickered “by Shelby. More often it was a case of their slickering themselves.

The good old boy had a computer behind his engaging grin. He listened, observed and quickly calculated how a situation affected his interests and how to best respond – without revealing what related irons he had in the fire or what he knew about the other fellow and his proposition.

He let people talk themselves in or out of a deal. Deals that, financially or ego-wise, he didn’t need to make – except when others were making money on his name. If money was going to be made on his “brand” he felt he deserved a cut. If nothing satisfactory was forthcoming or he felt his name and brand were being tarnished, he went to court. So often that one journalist complained, “when is it going to end?” It has.

And, he worked to win – a factor often overlooked when limning the story of Carroll Shelby as amplified and embellished by three generations of auto enthusiasts.

More importantly, he didn’t rest on his laurels. If he didn’t have three or four projects going that would make news, it was a bad week. What he could conceive, he had the energy and will to achieve, despite a congenital heart condition. He did not like excuses.

Working with him for 14 years as the 8th or 9th “PR man” of his career was like chasing after the man humorist Stephen Leacock described as, “mounting his horse and riding off madly in all directions.” There was lots of fun, particularly since Carroll by that time didn’t need a PR man – the automotive writers and an impressive numbers of news, feature, sports and general interest writers he’d met over the years knew and liked him. They could always count on “old Shel” for a good quote, a colorful anecdote or apt homespun analogy. What he needed was a gatekeeper to filter the opportunities, the media and appearance requests that flowed his way – constantly. At least two different bio films came his way but have yet to materialize.

He was the “Ali” of autodom- bold, irreverent and confident. He enjoyed stealing the spotlight by doing or saying the unexpected. Like Ali, he had fans around the world. A thousand or more named one of their newborns, “Shelby.” His star rose higher and shone brighter than many of the talented, dedicated people he attracted to his projects. But, as one associate observed, “He made a lot of Southern California mechanics rich. ” As the years went by, Carroll tried to acknowledge and make amends to those who felt their contributions had been lost in his shadow.

A decade after Carroll left the automotive scene, Lee Iacocca re-introduced him at Chrysler as “The Mr. Excitement of the auto industry.” The times and the circumstances that made him so may never return.

If there were a “Hall of Fame for those who got the last drop out of living,” Carroll Shelby would have a special niche. Certainly not with the saints or scholars or those born to power or riches – far from it. In fact, he might have to do a little penance in purgatory before ascending to his perch. But you can bet he’ll make it.

Across The Finish Line: Gene Ritvo