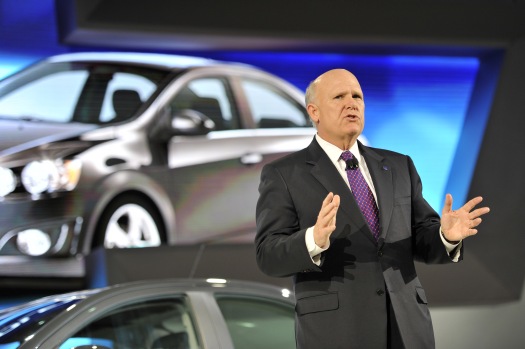 Why is it that Dan Akerson imparts another Q&A piece without making an ounce of news? Can it be that GM’s umpteenth CEO in its 105th year has become another victim of vocal paralysis?

Akerson, a Volt driver at age 64, treated the WSJ with one of its blandest half-page interviews on January 9, denying talks to sell Opel but confessing that GM is hopeful of leveraging its trendy partner Peugeot Citroen into a profitable GM showing in Europe this year.

A reversal of fortune for GM would follow in the footsteps of the P word (profitability) at arch rival Ford as Ford also hastens to end a Europe loss streak under new COO Mark Fields.

The “good news” from the General is Akerson’s hopes that Chevy and Caddy will become ‘true’ global brands, while the Buick LaCrosse remains “one of the best cars we make.”

Don’t forget, Dan, any turnaround would not have taken place without government involvement. That Uncle Obama played a key rescuers role has lit torches for all domestic automakers and suppliers!

The UAW could have forsaken its role as a shareholder in the health care trust fund (VEBA), but wisely stepped aside as a union and NOT a manager.

Akerson owes a debt both to the U.S. and the UAW!

Akerson told a pre-auto show news briefing that “what you’ll see in 2013 is a GM that is projecting vigor and some confidence.”

That GM needs a shot in the arm goes without saying.

GM CEO Daniel Akerson came up with a spot-on forecast on the eve of the Detroit North American International Auto Show-GM will make “modest gains” in the U.S. market share this year, owing to 13 new products.

Pacing the new-vehicle surge will be revamped Chevy and GMC pickup trucks and such winners as the Chevy Cruze an Malibu plus Cadillac ATS cars.