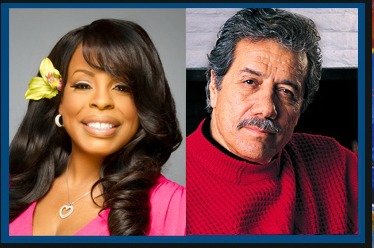 Known as the “Olivier of the Latino world,” Olmos is an individual flowing with talent and creativity. The multi-talented actor received an Emmy Award and a Golden Globe Award for his portrayal of Lt. Castillo on the popular television series Miami Vice. He also received a Golden Globe Award and an Emmy nomination for his work in HBO’s The Burning Season, the story of the Brazilian political activist Chico Mendes.

While busy producing, directing and acting, Olmos also makes time to participate in many humanitarian efforts. He is a U.S. Goodwill Ambassador for UNICEF, and a national spokesperson for organizations such as the Juvenile Diabetes Foundation. He has worked with David Rockefeller of the Rockefeller Foundation, and serves on the boards of many groups and organizations. Currently, he co-anchors the ABC News program, Primetime. He also reports for all ABC News programs such as 20/20, Good Morning America, World News with Diane Sawyer, and Nightline.

Nash starred in two successful TV projects simultaneously. She hosted the Style Network’s #1 rated home makeover show Clean House and was a celebrity panelist on the top-rated CBS entertainment news program The Insider. For her work on Clean House, Niecy won a Daytime Emmy Award in the Outstanding Special Class Special category as Producer/Host in 2010 and The American Women In Radio & Television honored her with the 2007 Gracie Allen Award for Outstanding Program Host. Nash recently wrapped the TV Land series The Soul Man opposite Cedric the Entertainer. The Soul Man has been renewed for a second season. She is also currently starring in the HBO pilot “Getting On” alongside Laurie Metcalf and Alex Borstein.

For six seasons (2003-2009) she played no-nonsense Officer Raineesha Williams on the hilarious Comedy Central hit Reno 911, a half-hour unscripted spoof of Cops and in 2008, Niecy starred in her own FOX comedy series Do Not Disturb, opposite Jerry O’Connell. Additional television roles include the award-winning series, The Bernie Mac Show, Presidio Med, That’s Life, Popular, City of Angels. She also guest starred on My Name is Earl, Monk, and CSI: Crime Scene Investigation.

“We are elated that Edward James Olmos and Niecy Nash will be joining us to host the 17th Annual Urban Wheel Awards. The opportunity to have two notable and distinguished award winning celebrities that embody the essence of this premier multicultural event will add significant value to our long-standing history of celebrating diversity accomplishments in the auto industry,” said Randi Payton, founder of the Urban Wheel Awards.